I would not call Ben Shapiro a “Christ-Killing Kike.” My review of a television show’s new Black lead would not conclude “But despite all of that, who actually wants to sit around watching niggers?” I would not have labeled Heather Heyer a “Fat, Childless 32-Year-Old Slut.  But since the Daily Stormer gets more hits in an average day than my blog does in a good decade — and since Chuck Palahniuk has never praised my writing, not even grudgingly —  I am hardly in a position to offer Andrew Anglin blogging advice.

The SPLC says “Anglin is infamous for the crudity of his language and his thinking.” Though his language is admittedly impolite, his vulgarity belies an accomplished preacher of “ironic Nazism disguised as non-ironic Nazism disguised as ironic Nazism.” A generation weaned on Internet trolling and South Park has no problem simultaneously holding and distancing itself from a fashionably shocking position.   And if you want to piss off your Boomer parents “Smash the cishet patriarchy!” isn’t nearly so effective as “Throw faggots off the roof!”

Provocateurs frequently, well, provoke people. Anglin is no exception.  The “fat, childless  32-year-old slut” comment cost the Stormer its Godaddy hosting and domain registration: a subsequent boast that Cloudflare secretly supported DS politics led the anti-DDoS service to terminate services.  Top-level domains in Russia, China, Catalonia, the Philippines and Anguilla (among others) have booted the Stormer. Advertisers want nothing to do with DS eyeballs; payment processors shun him; linking to Stormer articles can get you sent to Facebook jail.  Subsisting solely on cryptocurrency donations, Anglin has managed to keep on offending large chunks of the world with the support of an ever-growing number of young admirers.

She relayed to me that if I did not sell my building, 200 protesters and national media would show up outside — which would drive down the property value — until I complied. Gersh’s other conditions included that I make a public denunciation of my son in a statement written by the Montana Human Rights Network and that I make a donation to this organization from the sale of the property. As Gersh announced on Facebook, she was “spear heading” the campaign.

On December 16, 2016 Andrew Anglin issued his readers a call to action, complete with contact information for Gersh, her organizations, and her family.

Are y’all ready for an old fashioned Troll Storm?

Because AYO – it’s that time, fam.

Just make your opinions known. Tell them you are sickened by their Jew agenda to attack and harm the mother of someone whom they disagree with.

Since December, I’ve received more than 700 threatening, hateful, harassing, antisemitic communications from Anglin’s followers at all hours of the day and night, and it hasn’t stopped.

I’ve been told: “You really should have died in the Holocaust with the rest of your people.”

Sometimes, when I answered the phone, all I heard were gunshots.

I’ve received emails, texts and voicemails threatening my life. I was told I would be driven to the brink of suicide. There were endless references to being thrown in the oven, being gassed. There were even suggestions: “Call her up, get her to take you on a real estate tour and get her alone.”

I’m a realtor, but I’m no longer working. I can’t expose my clients to potential harassment. I’m in trauma therapy twice a week. Most nights I go to bed crying.

With the aid of the SPLC Gersh sued Anglin for emotional distress, invasion of privacy and violations of Montana’s Anti-Intimidation Act.  Anglin immediately fled the country, traveling throughout the world to avoid service of process.  (Alas, his efforts to gain a foothold in Nigeria did not pan out).  While laying low Anglin used over $150,000 in contributions to hire Marc Randazza, a well-known First Amendment lawyer.   In November the court rejected Randazza’s motion to dismiss: on January 19 the court ordered Anglin to turn over financial and cryptocurrency records. As Anglin has still not been located, it remains unclear how the suit will revolve or what recompense, if any, Tanya Gersh will receive from it.

Anglin has also established a presence on the ground with the Daily Stormer Book Clubs.  These loose collectives of angry young White men gather to discuss Western civilization, tell racist jokes and post flyers supporting the cause.  According to the ADL 2018 saw DSBC activity in sixteen states. DSBC political actions include a March 2018 pro-2nd Amendment “Operation Gun Grabbing Kikes” and a gathering outside a Houston “Punch a Nazi” workshop.  Stormer Book Club members frequently network with like-minded members of other pro-White organizations.  The “Punch a Nazi” get-together included members of the Patriot Front and the Houston Goylers (your “friendly neighborhood pro white meetup group”).   And at a private gathering after the Charlottesville “Unite the Right” rally DSBC Founding Sasquatch Azzmador read before an audience of White Right protesters an Anglin piece entitled “This is Our War.”

You have been slated to be the last generation of White men. They believed that we were down. We have climbed out of the grave.  And now you stand here today united as brothers, united as one, ready to tear down this system that was designed to destroy us all. A day is quickly coming when it is we who will be digging graves.

The day is coming when that beast that has lain dormant for 72 years is going to wake up and tear apart everything in its path.  And on that day those kikes are going to wish that they had never fucked with us.

DSBC fliers are irresistible to local and national media outlets.  Commentators issue thundering voice-over denunciations of “White supremacy” complete with pictures. This horrifies the normies and attracts the target audience.  And if people are intimidated by all this toxicity and hate, that may be as much a feature as a bug. Those who have vowed to “make racists afraid again” can hardly be surprised when racists begin returning the favor.    Very few movements have reasoned their way into political power. 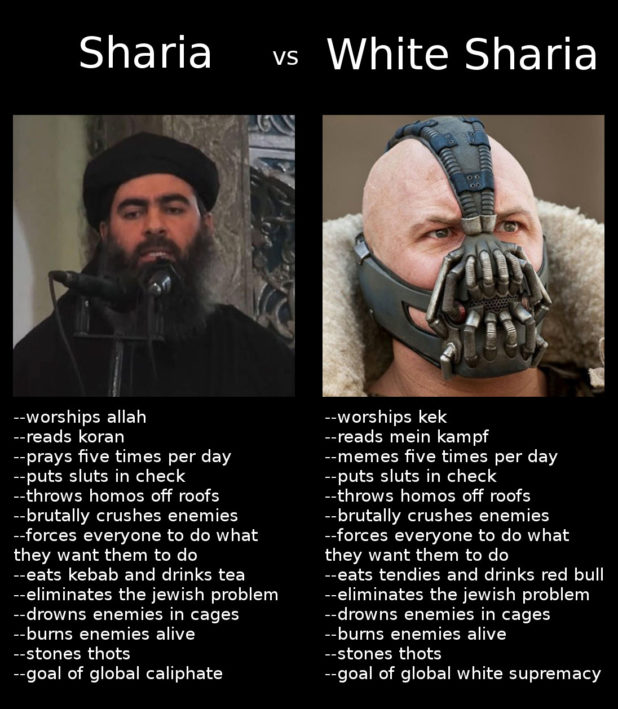 Anglin’s proposal for “White Sharia” (which he carefully distinguishes from “Sandnigger Sharia”) seeks to curb the spread of feminism by putting women back in their properly subjugated place.  As Anglin explained in a piece on Louise “Moldylocks” Rosealma:

People who are against the “oppression” of women are the actual woman-haters.

When this bitch was 15, you could genuinely say “Aryan princess.” She was glowingly pretty, I’m sure very sweet, giggly, would blush if you flirted with her – she was fit for a white analog to K-Pop.

It is difficult to determine how much of Anglin’s rhetoric is serious and how much is trolling.  An article he wrote explaining the White Sharia meme did little to clarify that:

So don’t give me this “true honorable white man” horseshit. It’s cowardly nonsense, coming from men who are afraid of taking on actual masculine responsibilities, one of the most important of which is taking care of your wife, which does, inevitably, involve physical discipline.

Anglin’s stated intention with “White Sharia”  is “simply restoring the patriarchal system that all European societies had up until the middle of the 19th century.” A different meme-maker might choose chivalry, the Southern Gentleman or the happy husband of mid-20th century American advertising.  Anglin, true to form, chose to play G.G. Allin to everybody else’s Iggy Pop, then mock the autists and white knight cucks who didn’t get it. His edgeplay draws no blood and his onstage defecation may be virtual, but Anglin has certainly found no shortage of fans who support his positions. And an even wider audience that can’t stop talking about them.

“Incels are a lot better off than married men, I can tell you that much,” Anglin explains in a recent article. “Both of them should have just gotten hookers.” Many of the Sexual Revolution’s discontents have indeed flocked to Right-wing movements.  This has led to no shortage of mockery about sexually frustrated Nazis who can’t get laid.  And there is no denying that by and large the incel community is an unimpressive crew — until they act on those frustrations. Rather than mocking the Right’s NEETs and incels we might do better to examine the poisoned culture from whence they spring.

Respectable Right-leaning folks might want to distance themselves from Andrew Anglin and his merry band of pranksters.  But that foul-mouthed albatross will be tied around our necks anyway.  Denouncing them wins us nothing and drives away potential supporters willing to take direct action toward our cause.  The Daily Stormer is the face of America’s White youth: from its ranks will come some of tomorrow’s leaders and many more of tomorrow’s voters.  There is a place for those who make us look reasonable but there is also a place for those who make us look frightening.