(Featured image: the meme which made me a nationally recognized White Supremacist)

Brian Kresge is very concerned about Maine’s anti-Semitic Republicans and has taken to the Maine Beacon to share his feelings.  Kresge is not alone in his fears. Jewish Americans have long tended to vote Democratic and only two of our 36 Jewish Congressfolk identify as Republican.  Yet there are also many prominent Jewish conservatives.  Norman Podhoretz, Charles Krauthammer and other “Neocons” have had an enormous influence on Republican policy: on the Paleoconservative and Dissident Right we have Ben Shapiro, Dennis Prager, Ezra Levant and Ron Unz.   I would agree that there are some loud and proud Hebrew-Haters on both the Right and the Left.  But I also believe there is room for dialogue.

Once we get past my (admittedly off-putting) sense of humor, Kresge and I have a few things in common.  We both have roots in rural Pennsylvania: I grew up a few hours north of Lancaster in Susquehanna County.  Neither of us are particularly beholden to political labels. During his political career, Kresge has run as both a Democratic and Republican candidate and also worked for Libertarian Gary Johnson’s political campaign.  We both wish to secure the existence of our people and a future for our children.   I do not doubt that his concerns are as sincere as my own.  Many a buddy movie has started from a far worse place.  To that end — and in the spirit of New Jersey wankerdom — I offer my unsolicited expertise on American anti-Semitism.

One passage in Kresge’s commentary jumped out at me:

My wife spoke to our daughter’s class during their 8th grade Holocaust unit about her three relatives who survived the Holocaust, from their life in the Polish ghetto to liberation from Auschwitz or Dachau. Shortly after that, a coterie of students started giving my daughter the Nazi salute on school grounds. There was no punishment. A year later, the district hosted a profoundly tone-deaf symposium on racism, moderated by a white police officer—not a Jew and not a member of any other ethnic subgroup. None of us got to speak to the real issues in this district. It was a purely masturbatory effort on the part of the RSU22 administration.

I attribute this school climate to the tone set by the administration and elements of Maine’s GOP who are immured in this insensate, bigoted nativism. My daughter, who is also descended from Iberian Jews who converted to Catholicism but practiced Judaism in secret, is also proud of her Latino heritage. When the hurricane hit Puerto Rico, and she was concerned about her great-grandmother’s friends and property in Rincón, the same classmates who rendered the Nazi salute were also saying “build that wall,” — perhaps RSU22 having failed in teaching them what a U.S. territory is.

Mrs. Kresge’s educational efforts face a potent counterweight — an endless supply of “oven memes” which reduce Hitler to a joke and the Holocaust to the punchline.  Jewish organizations like the ADL have worked overtime to track bigots and shut down anti-Semitic speech. But they forgot one of the basic tenets of child psychology: the more you condemn something, the more desirable it becomes.  Declare the Daily Stormer the Worst Website Ever and rebellious youths will beat a pathway to its door.

Today most eyewitnesses to World War II are dead or incapacitated.  As time passes, the Shoah will continue to lose its status as Emblem of Evil and become just another messy 20th century genocide.  Hitler will cease to be the Modern-Day Sauron and be demoted to the mere Bloody Dictator tier currently occupied by Stalin and Mao.  The Holocaust will certainly remain a powerful image within the Jewish community: amongst the Gentiles it will join trench warfare and napalm as outdated symbols of man’s inhumanity to man.  Or as one meme-maker put it: 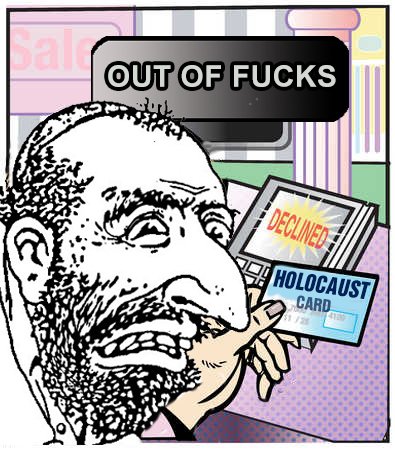 And can we talk about the Anti-Defamation League?  When White Americans try keeping track of anti-White violence, they get tarred as “racists.”  (You can ask Colin Flaherty about that).  When White Americans try organizing to protect their interests, they are tarred as “White Supremacists.”  (Tom Kawczynski can verify).  Yet the ADL is lauded for its efforts to silence critics by any means necessary.   Criticism of George Soros; concerns about immigration;  excessive distaste for Harvey Weinstein or human rights abuses in Palestine — all these and many more can land you on the ADL’s “Naughty” list.

But as Aesop reminds us, you can only cry “WOLF!” so often before people stop taking you seriously.  The administration at RSU22 took token steps to appease the complainants,  then ignored further demands.  They had no reason to kowtow to Kresge and his family.  The ADL’s opinion has very little impact on their local school board elections or on their budget.  (This is something “cancel culture” is learning the hard way: the exposé Surviving R. Kelly led to a spike, not a drop, in the embattled hip-hop artist’s sales and streaming income).

This probably has Mr. Kresge worried.  If it doesn’t, it should.  Right now a lot of Americans are busy chasing the Shadow.  Some blame “White Supremacism” for everything from urban decay to global warming.  Others pin all the world’s woes on “the Jews.”  The Shadow offers easy answers to difficult questions; it lets you ignore all your little problems and focus on the Big Problem that holds you down; it gives you a heroic purpose in a battle between Good and Evil.  But ignoring problems doesn’t make them go away.  And as Carl Jung noted:

The psychological rule says that when an inner situation is not made conscious, it happens outside as fate. That is to say, when the individual remains undivided and does not become conscious of his inner opposite, the world must perforce act out the conflict and be torn into opposing halves.

The Israel lobby and large Jewish organizations have far too much influence in American politics and have used that influence to America’s detriment. Jews have a degree of ethnic cohesion and in-group preference that Whites should envy: Jewish groups also fight tooth and nail against White people showing the same. Ashkenazim are hugely over-represented in the media and entertainment industries and make up a lion’s share of the “White” people attending Ivy League schools.  These are all issues which deserve attention — and issues which of late have received lots of it.

Yet amidst all this attention other important points are frequently missed.  Well over 90% of mainstream media outlets are currently owned by a handful of corporations and billionaires.  I couldn’t care less if the guy managing my news feed is named Shlomo Goldstein, Chang Weng-Xi or Whitey Caucasian IV — I don’t want anybody managing my news feed.  We’re giving Israel $38 billion in defense funding over a decade.  In the first eight months of 2019 we ran a $195.45 billion trade deficit with China.

(And while we’re talking about China: does anybody else remember when “Free Tibet” was on the lips of every celebrity?  You’ll notice that Tibetan independence has become distinctly less fashionable nowadays.  And while stars are quick to condemn Islamophobia in America and Europe, they’ve been notably reticent about Chinese re-education camps for Uighur Muslims.  We’ve been chasing Hollywood shekels for a while.  Maybe we should start tracking the Renminbis).

As a Roman Catholic I am well aware of the dangers of “dual loyalty” accusations.  I see no reason to question Kresge’s patriotism and plenty of evidence to support it.  However I may feel about his politics, I find it very hard to hate a man who writes something like this:

In between this Memorial Day and the last, a former soldier with the 2nd Battalion, 112th Infantry and a veteran of our 2008-2009 OIF mobilization, walked downstairs in his parents’ home, where his mother was eating breakfast, and put a gun to his head.

His last words were, “I am in so much pain,” before pulling the trigger. He lived long enough to donate his organs, so that at least four other people might live. His BAC was high, an indicator that he had lost the battle with PTSD and addiction.

Our old unit has lost more soldiers to suicide than it did to combat, and that is not unique among National Guard units…

It’s hard for me to see Memorial Day as anything but a superficial display of patriotism and gratitude. There are rays of authenticity—every single veteran who honors their departed peers means it, usually. We’ll read the pretentious elegy poems like Freedom Isn’t Free or Flanders Field. We’ll have moments of silence. We’ll wave at the remnant of the Greatest Generation on their floats.

And then we’ll go right back for our casual disregard for the beautiful young volunteers that make up the present warrior class. We will, without a second thought about them, doom them to be haunted by the same experiences that warfighters past should rail mightily against. We’ll tell ourselves that out of control defense spending is the only appropriate way to honor our service members, forgetting that seeking peace is a far better way to honor them.

Though they may suffer from insensate, bigoted nativism Mainers are not especially given to violence.  Maine is the safest state in America, with a violent crime rate less than 1/3 the national average.  Once you get past a few tasteless jokes and some awkward encounters, even Kresge acknowledges that “Maine is, and I suspect will remain, a splendid place to be a Jew.”  But while he acknowledges a certain amount of tacit anti-Semitism among Maine’s Left, I don’t know if he is aware of how much open and blatant anti-Semitism is encouraged among Maine’s far Left.

To enlighten Kresge on that issue, here are some comments from Facebook’s Maine BDS Coalition. 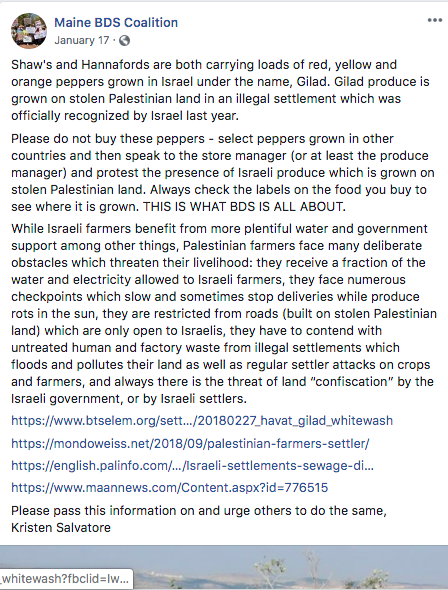 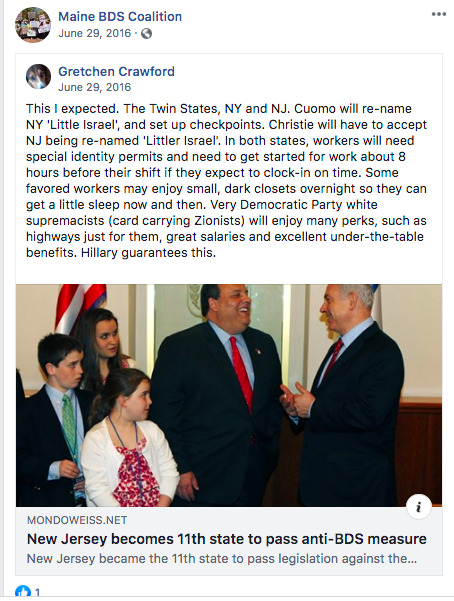 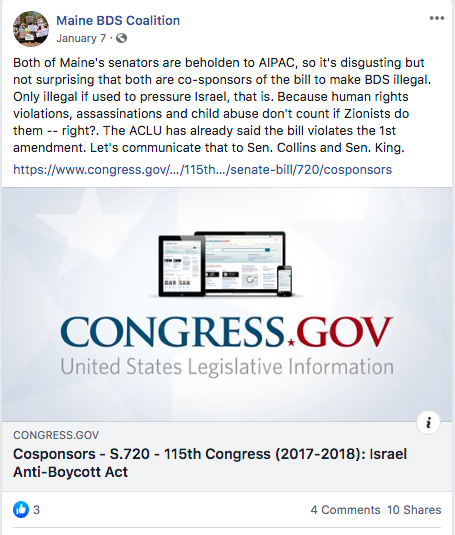 The Maine BDS Coalition is run by longtime Maine radical Lisa Savage.  Savage has long been one of Tom Kawczynski’s loudest and harshest critics.  She is also a teacher at Carrabec RSU#74 and aspiring Senate candidate on the Green Party ticket.  You appear concerned by Republicans reposting Rothschild conspiracy theories, Mr. Kresge.  So how do you feel about Leftists teaching Maine children that Israel is a genocidal apartheid nation which controls the US government? 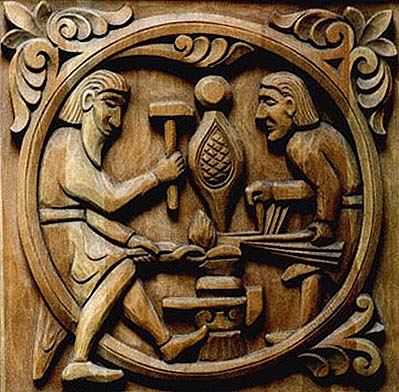