Oscar Wilde once said the only thing worse than being talked about was not being talked about.  Oscar Wilde also went to prison and died broke.  Some bad reputations get you Slutwalks and positive feedback.  Others can get you assaulted, fired or even jailed for life plus a few hundred years.  So when Maine for Mainers, a group run by my friend Tom Kawczynski, was targeted for a smear campaign comparing their local meetings to Klan gatherings, I took some notice. As Tom puts it, Maine for Mainers seeks to “protect the culture and way of life Maine has enjoyed for centuries.”  Many of its members are White.  Since Maine is 95% White that is hardly surprising, nor should it be an issue unless you see Whiteness as an existential problem.  Maine for Mainers is critical of immigration and refugee resettlement.  According to its critics that makes the group de facto racist and White Supremacist.  It also provides them with a convenient way to shut down any uncomfortable discussion or suppress inconvenient facts.

So who are those critics?  Quite a few of them have banded together on a page formed in opposition to Maine For Mainers, Maine For Everyone.  The two groups spend a good bit of time talking about each other.  But what if we took it one step further? No, I don’t mean shooting at each other — I mean talking to each other!

Long before Zuckerberg was snitching on his fellow middle schoolers  I was a seasoned Usenet veteran. In that capacity I led a few growing, learning and hugging moments between discussion groups.  Many flames were written and many insults thrown: at the end of the day we wiped off the fake blood, took off our rasslin’ masks and came out of the whole exchange with some new ideas on all sides.   When you’re stuck in clown world sometimes the only response is laughter.  And when you want to build a bridge sometimes it’s best to start with a troll.

I want America to remain a place where that freedom of expression is preserved and cherished.  Meraxes has put a great deal of time, effort and courage into becoming who he is.  I want America to stay a place where he can do that as safely and comfortably as possible.  Neither do I think less of Meraxes for his disability.  While many on the Right rail about “welfare leeches,” they generally neglect the social and economic costs of corporate welfare.  Let’s take a look at Central Maine Power, which is owned by Spanish multinational corporation Iberdrola:

In 2010 … CMP reduced its workforce as part of the company’s transition to smart meters, which transmit customer usage data to the company electronically and reduce the need for CMP staff to physically take readings from customer meters. Eighty-five staff accepted voluntary early retirement, and another 36 accepted a severance package from the company in 2010, according to PUC filings.

The $200 million smart meter project was funded with the help of a $96 million federal grant. Iberdrola and its subsidiaries have received more than $2.2 billion in state, local and federal subsidies since 2000, according to corporate and government accountability watchdog Good Jobs First.

My ideal America has a strong safety net for those in need.  My ideal America recognizes that injustice and social inequity are breeding grounds for disorder, crime and despair.  My ideal America prioritizes the needs of its people over the profit margins of transnational corporations.  I would give Jack Meraxes that $96 million to spend as he would and think it a far better investment.  I would certainly have more confidence that it would be spent to help the community, even if some went to causes I don’t support.  Whatever our differences of opinion, I do not doubt his sincerity.

Ms. Rothschild is not being threatened with Nazi violence.  She is being mocked because she is Saturday Night Live‘s vision of an NPR listener: a bespectacled middle-aged Jewish woman in a pink pussy hat surrounded by animals.  Yes, people on Maine for Mainers noticed her name.  Outside of “Shylock,” “Soros,” or “Iscariot”, it would be hard to have a more notoriously Semitic last name.  Yes, they — OK, I — said some unkind things about her nose.  But nobody was calling for violence against her.  Nobody wants to get her fired from her job.  Nobody sent out flyers telling her neighbors she sells her foster animals to laboratories.  We did nothing save have a few laughs at her expense — and that is far less than she would see done to us!

I do not hate Ms. Rothschild because she is Jewish: I don’t hate Ms. Rothschild at all.  If anything, I feel a sort of affectionate amusement.  Though I may chuckle at “cat lady” jokes I love animals and greatly appreciate Ms. Rothschild’s efforts in sheltering pets.  If she would provide me a Bitcoin address I will happily send $18 in dog food money her way with a hearty l’chaim.  And if Ms. Rothschild ever sits down with Dana Kawczynski for a conversation about pet reptiles, I strongly suspect both might be surprised to come away with a new friend. Maine for Everyone … who is more woke than Gandhi and ready to challenge the colonialist and settler connotations of the name of the Occupied Territory Assigned “Maine” at Birth.  And Arno is nothing if not ready. 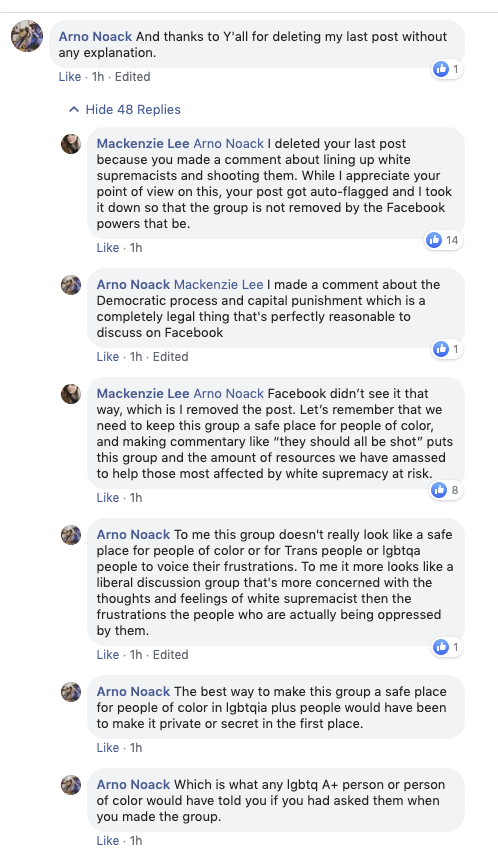 But midst the angry soyfolk and earnest Birkenstock-wearers, we find a few smart Leftists.   They realized quickly that Maine for Everyone was not just a dumpster fire, it was a security risk which provides enemies with a quick and easily tabulated harassment list.   (Since they have used M4M’s members list toward those ends, I am surprised that vulnerability never occurred to them).  One of the smarter members is a fellow named Andrew Zimmerman: 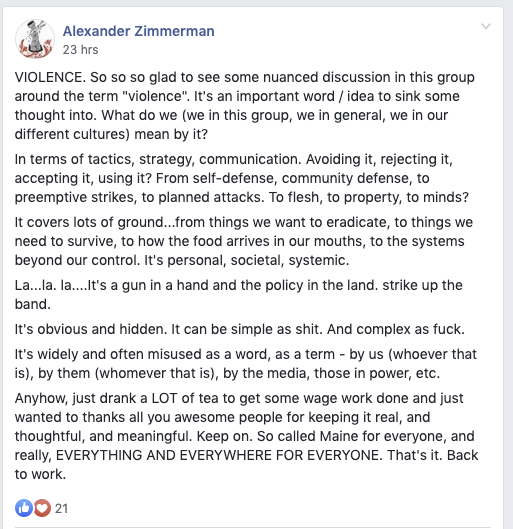 I’m guessing Mr. Zimmerman has probably consumed the Marcuse/Popper Kool-Aid and feels that any response only legitimizes my existence.  So while I’ll understand if he doesn’t reply publicly to my observations, I hope he will consider them nonetheless.

Something tells me that Mr. Zimmerman has noticed that the coalition of Lefties you see in Maine for Everyone — and in progressive politics throughout Maine — is an eensy weensy bit, well, bourgeois.  I see lots of college students and more LGBT+ folk in various shades than you can shake a stick at.  I see lots of retirees, tech geeks, social workers and teachers.  But I don’t see too many blue-collar people.  Come to think of it, Maine for Mainers skews way more proletarian than Maine for Everyone.

We can continue seeing each other as implacable foes. There are certainly some very real political differences between us.  But there are also more than a few common points.  You are a small collective of angry Left wingers.  We are a gaggle of pissed-off Right wingers.  It is in the interests of the plutocrats, the politicians and the transnational financial conglomerates that we stay at each other’s throats.  But what if we set aside our differences and went after our common foe?  What if we really could spark a revolution by the people, of the people and for the people?

Just a few thoughts.  I’ll be here if you (or anyone else) wishes to open a dialogue.  We can talk like adults about difficult topics and work toward difficult solutions.  Or you can continue working with people who wish to subvert the Left and replace grassroots progressivism with Blue Astroturf.

But that is a story for another blog post…