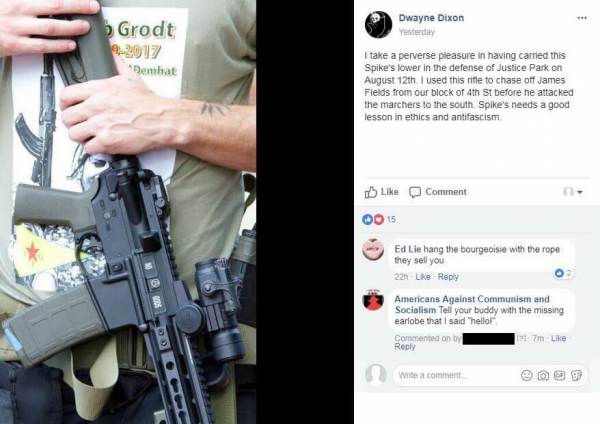 “I didn’t want to hurt people, but I thought they were attacking me,” James Fields said tearfully upon his arrest. “Even if they were attacking me, they’re still people.” In a jailhouse call to his mother Fields said he was mobbed “by a violent group of terrorists.” AntiFa member Dwayne Dixon bragged about using a rifle to threaten Fields immediately before the accident.  Yet despite this Fields was found guilty of the premeditated murder of Heather Heyer, along with eight counts of malicious wounding and one count of failing to stop at an accident involving a death.  He faces 20 years to life in prison: his upcoming trial on federal hate crime charges could land him on death row. 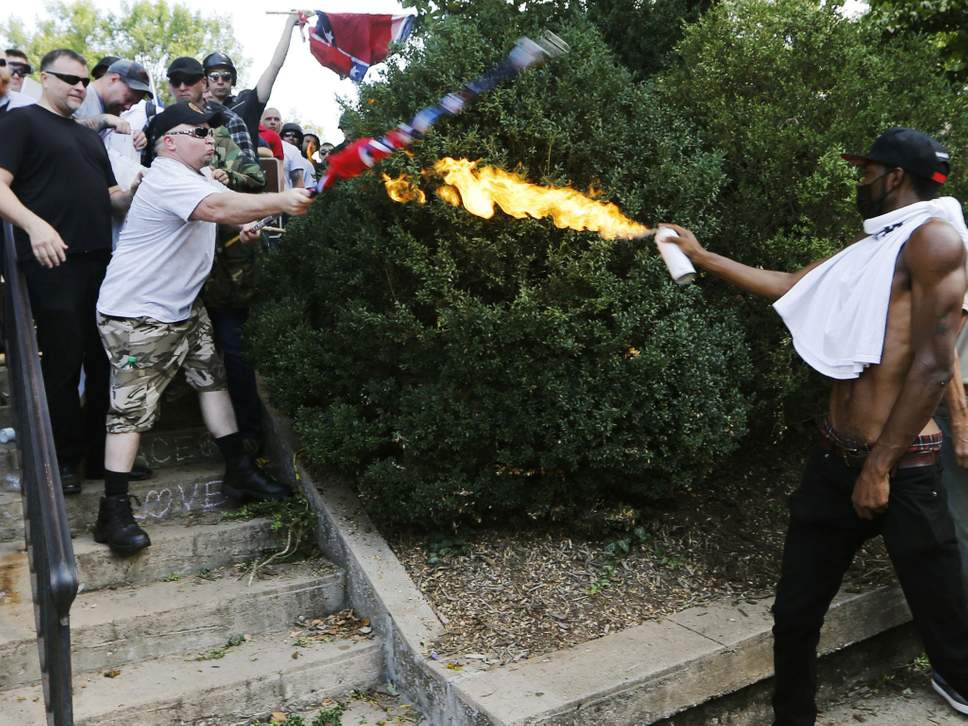 Richard Preston is currently serving four years for discharging a firearm after a man attacked his group with an improvised flamethrower.  (That man, Corey Long, was sentenced to 20 days in jail for disorderly contact).  Jacob Goodwin got eight years for beating Deandre Harris: Alex Ramos got six. Harris was acquitted of charges for beating a man with a flashlight earlier that day and raised over $166,000 for his injuries on a GoFundMe campaign.  Another man involved in that fight, Daniel Borden, has pled guilty to malicious wounding and will be sentenced in January.

The Charlottesville Police Department has been widely criticized for failing to prevent violence at the 2017 Unite the Right rally.  Both sides claim police favored the other: both justify their actions as self-defense.  But in the aftermath one side’s violence has been treated far more harshly.  None of the many violent Leftists who traveled to Unite the Right have been targeted for prosecution like the Rise Above Movement.  And while White Nationalists regularly lose jobs over Facebook memes, firearm-toting radical Dwayne Dixon remains a faculty member at the University of North Carolina. It’s hard not to wonder if these convicts are being punished for their actions or their beliefs.

You may not have a problem with this.   If you lean Left, you may think it a grand thing indeed.  Is this not proof, after all, that the rest of the world finds us as abhorrent and dangerous as you do? But while that may be so, ask yourself who the real revolutionaries are.  Are they the ones the authorities fear or the ones they coddle as useful tools? Would they would tolerate you if they thought you had a chance of achieving your utopia? Would they would fight so hard to silence us if they didn’t fear our message more than yours? And do you not expect the weapons they used against us will be taken up against you when you become inconvenient?

Though you may have heard otherwise, White Nationalism is controversial even on the Right. Chris Cuomo of CNN justifies AntiFa violence by claiming “Fighting against hate matters.” Mainstream conservatives distance themselves even from “multicultural White supremacists” like the Proud Boys.  (And speaking of people getting arrested for self-defense… ).   If you lean Right, you may want to distance yourself from the whole sordid affair.  How will you ever prove you’re not racist when you defend Ku Klux Klan Wizards and convicted murderers? Unfortunately, that center you are seeking no longer holds. Don’t believe me? Ask Tucker Carlson’s family or Vox cofounder Matthew Yglesias.

Would Yglesias feel any more empathy had Carlson’s wife responded to a perceived home invasion by shooting a few invaders — or if you did? Would your social media history pass muster if you ran over someone in your frantic effort to escape an armed mob? Or would your criticism of Colin Kaepernick be evidence you meant to hit that Black man you never saw and your joke about illegal immigrants proof you were a bigoted terrorist?  You might not expect this would ever happen to you.  A decade ago “marriage should be between a man in a woman” or “there are only two genders” wouldn’t get you sanctioned for hate speech but look where we are now.

You may or may not agree with the political positions espoused by the Charlottesville prisoners.  You should be very concerned that they were convicted based on those positions and that equally or more guilty parties were exonerated for theirs.  You should be worried that mob violence is being normalized as a mode of political discourse, and that your government is favoring one mob over another.  You should ask yourself if a 21-year old who lost his way in a strange city should spend the rest of his life in prison for an accident that owes more to police incompetence than malice.  And when you are done, you should meditate on how far people will go when they no longer trust the law, and what they might do to defend themselves against tyranny.