One of the American Left’s most beloved rituals is the “Owning of Privilege.”  To be an Ally in the Struggle, we are told, we must first acknowledge the many undeserved breaks we have received thanks to our European heritage.   Should we feel inclined to extended navel-gazing we can also examine how our physical fitness, heterosexuality, college degrees, mental stability and other assets also advantage us, then take steps to neutralize those benefits.  There are no end of ways in which we can live unfairly nor of ways to feel guilty about it.

Yet when our study of privilege and power turns to one particular White ethnicity that prosecutorial zeal quickly fades.  When we note that C-level offices remain overwhelmingly White and male we are exposing gender and racial inequities.  But when we say Jews are enormously over-represented in the entertainment industry nobody suggests Hollywood recruit more Gentiles.   Comparing the wealth of White and Black families shows the injustice which still persists in our nation. Point out that Jewish Americans earn a good deal more money than other ethnic groups or ask why less than 0.2% of the world’s population makes up 20% of the world’s 50 wealthiest people and suddenly you’re a goose-stepping Nazi.

Since a significant majority of American Jews are identified as “White” they reap all the benefits of White Privilege.  But do they also have a “Jewish privilege?”  One Facebook commenter averred:

Regardless of when your ancestors (or yourself) moved to the US or what they did, if you appear white, you get to do certain things, say certain things, and go certain places without fearing for your safety or fearing harassment and a plethora of other things (intersectionality aside – this changes if you are a woman, if you are queer, if you cover your head, if you have an accent, if you’re disabled, etc..). That’s privilege. You just get to do things that other people don’t. People with that privilege should acknowledge it and try not to perpetuate it, but you walk through the world with it, and you didn’t do anything wrong to get it. The world is just a little easier for you – that’s all it is.

[T]here is no reality where a Jewish American (white appearing or not) is more privileged than a Christian American (white appearing) or a white American whose religious beliefs cannot be discerned. (intersectionality aside – any intersectional example would only confuse your argument)… the privileged individuals you named, if and where accurate, do not endow an entire ethnic group with privilege the way that white skin endows people who look white with privilege. This is a false equivalence.

Let’s go back to the original document which introduced the whole idea of “privilege,” Peggy McIntosh’s 1988: “White Privilege: Unpacking the Invisible Knapsack.”

In that essay, McIntosh explains

Among the privileges listed are “I can avoid spending time with people whom I was trained to mistrust and who have learned to mistrust my kind or me;”  “I can easily buy posters, post-cards, picture books, greeting cards, dolls, toys and children’s magazines featuring people of my race” and “I can chose blemish cover or bandages in “flesh” color and have them more or less match my skin.”  Given that, let’s see if we can come up with some examples of “Jewish privilege.”

If I am attacked for my Jewish ethnicity or religion I can be confident people will take me seriously and not engage in victim-blaming.

When Los Angeles police declared anti-White graffiti in a gentrifying neighborhood a “hate crime,” Mic writer Marie Solis quoted a Latino resident as saying “We want these galleries out… We’ve been experiencing oppression for hundreds of years. We’re not going to take this sitting down” and stated:

[T]he LAPD may be just following the letter of the law — which, according to the FBI, dictates that any “criminal offense against a person or property motivated in whole or in part by an offender’s bias against a race, religion, disability, sexual orientation, ethnicity, gender, or gender identity” qualifies as a hate crime. But that doesn’t mean this case isn’t in the need of some dire nuance.

While a declaration like “Fuck white art” certainly pinpoints members of a particular race, it’s targeting a dominant group, rather than a minority one. When hate speech is wielded against people of color, LGBTQ people or women, there’s much more at stake — in many cases, their lives. 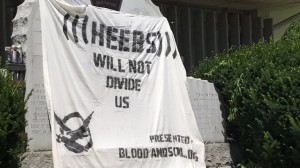 Yet when Blood and Soil hung a (((HEEBS))) WILL NOT DIVIDE US banner at an Orthodox synagogue in Lakewood, New Jersey, the incident was treated as an unqualified tragedy.  While reporters talked about “earlier anti-Semitic incidents,” they downplayed the fact that those flyers were put up after Hasidic Jews were arrested for numerous financial crimes, including $2.4 million in welfare fraud and the theft of nearly $800,000 in public tuition funds. When Mark Di Ionno wrote an article that discussed honestly the tensions between local residents and the Hasidim, he soon found himself writing a follow-up to make sure nobody thought he was an anti-Semite and to distance himself from many of the complaints made by locals.

I have a heritage and tradition whose unbroken roots stretch back over 3,000 years

Most European-Americans are the product of a melting pot. They are lucky if they can trace their roots back four generations and few can untangle their ethnic heritage past a few vague areas and a couple of possibly apocryphal stories.  Jews can not only call themselves the Children of Abraham, they can claim citizenship in their ancestral Homeland: all those centuries of exile couldn’t take Zion out of your blood.  This is a blessing few European-Americans share. Some of us are trying desperately to rebuild our Ancestral traditions from snippets and shards; others try to make up for our perceived lack of culture by plundering others; still others have sunk into a slough of despair where past and future are swallowed by an endless now of bright colors and strong feelings and whatever diversionary sensations there are to be found.

You often seem upset, even hostile, when we reconnect with our European heritage as White people.  For you “White” was just a label that helped you live among the Goyim: your identity was locked safely away in your Hebrew name and your Jewish history.   Being “White” was a convenience that you would happily trade away for a more just world where we were all judged solely on the content of our characters.  For those of us without that heritage and without that identity, “White” was all we had to connect us to Europe and our European heritage.

We’re not adverse to a less racist world.  Some of us gave you grief over that whole Civil Rights flap, sure, but by now most of us are over it or at least reconciled to a multicultural America.  But when a Jewish anti-White activist like Tim Wise tells us conservative White people “are on the endangered list.  And unlike, say, the bald eagle or some exotic species of muskrat, you are not worth saving,” it makes us feel a little bit uncomfortable.    And when we notice that many of the people screaming loudly about White Nationalism are perfectly happy to support Jewish Nationalism, we start to look askance at our “fellow White people” who use their Whiteness to lecture us but claim their Jewish heritage when it benefits them.

One thing about the Jews which fascinates and terrifies us Goyim is your ethnic cohesion: there really is nothing like it anywhere in our Gentile experience. Black Americans generally have a strong sense of their African identity because American culture makes it damn near impossible for them to forget it.  But the NAACP is small-time when it comes to the resources the ADL, AIPAC and many other Jewish organizations can bring to the battlefield.  Messing with the Sicilian community may leave you with a matching set of broken legs: cross Harvey Weinstein and you’ve got ex-Mossad agents on your tail. Your Tribe protects itself and looks out for its own like nobody’s business.

My ancestors came over from Ireland to escape the consequences of potato blight and malevolent neglect on the part of their British overlords.  Even today we are still working through the horrors of a famine that left one million Irish dead and forced another million out of the country.  Yet you can deny publicly that there ever was an Irish potato famine; you can claim the death tolls are exaggerated and the horror stories apocryphal; you can even say the damned Potato Niggers had it coming and the British should starve the rest of them out.  I would not recommend saying any of these things in an Irish neighborhood,  but you will not be arrested for them.  Neither will you be charged for denying the Armenian Genocide or disputing that millions of Ukrainians died during a Communist-created famine they call the Holdomor.  (You may, however, get into trouble for noticing that the Communists behind the Holdomor were Jewish).

The Rwanda genocide, the Belgian Congo atrocities, the Killing Fields of the Khmer Rouge — all these and many other contemporary horrors may be freely discussed, mocked, denied and even laughed at.  Try denying the Holocaust in Europe and watch how quickly you get arrested: ask inconvenient questions about the Holocaust in America and watch how quickly you get labeled an “anti-Semite” and exposed as such to your neighbors, family and friends.  Note that I am not saying that the Holocaust didn’t happen, any more than I am implying Black ’47 or Medz Yeghern were hoaxes.  But I am saying that the Holocaust has a protected status which is not granted to other atrocities, and suggesting that this is due to the power of the Jewish community and Jewish organizations which have worked hard to control the narrative around one of their history’s defining moments.

If you are Jewish, you may be feeling a little uncomfortable right now. Perhaps you are experiencing what sociologist Robin di Angelo calls “Jewish Fragility.”  As di Angelo explains it (*), Jewish society insulates its members from the Gentile world and instils in them a feeling that they are “Chosen people” entitled to deference and respect.  Any efforts to question this position or to interrogate the relationship between Jews and Gentiles can induce emotions like fear, anger and guilt along with behaviors such as argumentation, silence, and withdrawal from the stress-inducing situation.  Understand that nobody is holding you personally responsible for having Jewish privilege: all we are asking is that you give up your toxic Jewish behaviors and recognize the damage they have caused and continue to cause the world.  And if you still find this discomforting and frightening, perhaps now you better understand how White people feel when your co-ethnics behave this way toward us.

3 thoughts on “The First Letter of Kenaz to the Hebrews”