In reconstructing the religions of pre-Christian Europe we must first consider what concepts like “worship,” “reverence” and “deity” meant to our ancestors.  This is no small task.  For over 1,000 years Europe has been under the sway of an aggressive monotheistic faith whose cosmology, metaphysics and ethical philosophy are very different than the traditions they supplanted: what’s more, its adherents considered these ancestral practices diabolical superstitions and worked overtime to eradicate them.  Those looking to the past for guidance must rely on a good bit of speculation and educated guessing if they are to revitalize these old religions.

One of the most important differences is in the roles these traditions assign to humanity. Christianity declares man to be the crown of creation, ruler over the earth and all the fruits and treasures therein.  Our pre-Christian European ancestors saw man as one of several sentient species sharing this ball of dirt. The Alfar (Elves), Duergar (Dwarves) and Jotuns (Giants) all played a role in the Grand Scheme, and all had their homes — not only worlds of their own but places in our world which they claimed as theirs.  Even today Icelanders divert construction projects rather than disturb “Elf Stones.”  There is considerable controversy as to how modern Heathens should approach these beings, particularly the Jotuns.  But if we are to understand our ancestral traditions we will have to engage with our ancestral neighbors. 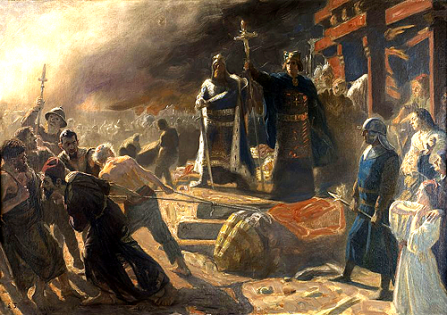 While Christianity declared man the only being with an immortal soul and the capacity for reason, our pre-Christian ancestors believed animals capable of reason, speech and even great wisdom. (Consider the many fairy stories of enchanted beings speaking in the form of snakes, birds, bears or other animals).  In seeking to reconstruct the religions of pre-Christian Europe we will do better looking to Animism than to any “religion of the book.” And while Christianity is grounded in logos (the Word), pre-Christian Europe sought the Divine in locus: they preferred sacred groves to sacred texts and holy mountains to holy stories. Anybody wishing to honor the Gods of Northern Europe may want to start by honoring their local landvaettir (land-wight) and getting to know the spirits of their local creeks, mountains, trees and stones.

Our ancestors lived not in a divinely-ordained hierarchy but in a complex web of interacting players who might work for or against each other in any given situation.  It was a harsh and unforgiving world where loyalty to one’s clan was prioritized of necessity, a world where Gods and men alike struggled to create order out of chaos.  There was no straight and narrow road to heaven, only innumerable paths that might bring weal or woe: instead of agonizing over their “sins,” the followers of Odin and Thor worried about maintaining their honor before their fellows whatever good or bad fortune might befall them.  While we seek to “be who we really are,” our ancestors defined themselves not as individuals but as part of an extended family and clan. Christians might flagellate themselves bloody over their real and imagined sins: heathens measured “good” and “evil” in terms of what would harm or benefit their people.  That is not to say that they considered outsiders fair game. Hospitality traditions offered strangers in pre-Christian Europe far more protection than any “unbeliever” could expect in Christendom.  But our ancestors maneuvered in their multifaceted world by knowing their place therein.

Christianity has a decidedly Manichean streak. The body is looked upon with suspicion while the soul is prioritized: the universe is divided between an all-good and all-loving God and an all-evil and all-hating Satan with no grey area.  Northern Europeans were less enamored of this view. They distinguished not between good and evil but between fire and ice, a split which can be seen in Vodou’s distinction between “hot” and “cool” spirits and in the Yin and Yang of Chinese philosophy.  Sturluson’s vision of Ragnarok shows the obvious influence of Christian apocalyptic literature: a Hindu might hear the same story and think of Shiva opening his third eye to destroy illusion.  The sagas chronicle the tales of many bad people and their bad behavior: invariably they are motivated not by supernatural forces of darkness but by human weakness.  Our ancestors were well aware of man’s capacity for vile deeds and saw no reason to blame the Gods for our failings.